3 DAYS THAT CHANGED THE WORLD.

3 DAYS THAT CHANGED THE WORLD.

The Jews found him guilty but the Romans found Yeshua Innocent.

Pilate said as he washed his hands, "I am innocent of this man's blood" the Jews actually responded, "His blood be upon us and our children" and that statement caused the jew to be forever cursed.

THE BEATING OF YESHUA WAS HORRENDOUS::
It is a medical fact, that The Creator built into (psalm 139:14) your wonderfully made body, that if you suffer a life threatening trauma, your body will shut down all none essential body functions, and close down, so that you faint, giving the body the best chance to survive...
Yeshua did not faint and was not allowed to faint, because the devil made sure that none of the injuries, Yeshua received were life threatening.

Instead the devil beat him to within an inch of his life, keeping Yeshua conscious, were Yeshua never fainted, but felt each and every, whipping, beating, punching and kicking, so that every inch of his body was cut to the bone, and every bone that could be bruised was bruised and the beating was agonising.
Yeshua did not have any bones broken John 19:36 and he felt every second of the horrendous pain, AWAKE AND CONSCIOUS!
At the cross Yeshua felt the cold metal pierce his flesh and twist his bones, all the while with astonishing love, he was looking at his crucifiers thru eyes of forgiveness. Knowing that in just a short time, the same people who killed him, could be saved, by believing and confessing Romans 10:9-10

The Jews then bring a curse on their religion and people when they ALL say (Matt 27:25) "whole people" say: "His blood be upon us and on our children". "Pilate resisted but eventually gave the order to execute Yeshua.

Proof Yeshua died for our sins.

Friday, April 15, 30 AD (9:00am-12:00 noon) - Yeshua forced to carry his own cross, then actual crucifixion
The last few moments of Yeshuas life, were spiritually immense, so much so that what we should know and fully understand that the devil was there making sure that Yahweh (God) did! Not  intervene, to make the torture of Yeshua any easier.
The devil also made sure that everything happened in a legal way, so that The Creator Yahweh did not do anything out of character, or anything that was not Biblical or Godly and fair .

In the very last moments of life Yeshua made the most life affirming, life saving, and like changing, comment "MY God MY God why have YOU forsaken ME"
It was at that moment, that the Holy and Sovereign Creator Yahweh, had to turn his face away from Yeshua, as Yahweh put the sins of the world past, present, and future, on the shoulders and in the blood of his only son Yeshua and made Yeshua the Lamb of Yahweh (God) to take away the sins of the world....

When Yeshua said "why have YOU forsaken ME" he felt the presence and fellowship of his Father leave him, knowing that a Holy Creators Spirit cannot be in the presence of sin or any sinner!

It is also the same for every man, so understanding that truth, when we teach on the comment "why have YOU forsaken ME" it should be in rejoicing, because it is our proof that Yeshua did in fact die for the worlds sins.
Let me say that again, it is our 100% proof that Yeshua died for our sins . WOW and not as the devil teaches that Yeshua had "doubts"...

So if you are truly a son of Yahweh, when you sin you will also feel the presence of Yahweh leave you, just as Yeshua did..

THE 3 “I AM NOT GOD” STATEMENTS OF YESHUA.

THE FIRST I AM NOT GOD CLAIM OF YESHUA ON THE CROSS:: Yeshua feels the Holy Spirit of The Creator leave him as he takes on the sins of the world and he cries out "MY God MY God why have YOU forsaken ME!


THE SECOND I AM NOT GOD CLAIM OF YESHUA ON THE CROSS:: Just before his death Yeshua again establishes that he is NOT GOD and that only The Father Yahweh can forgive sin when he says "FATHER forgive them"

THE THIRD I AM NOT GOD CLAIM OF YESHUA ON THE CROSS:: Again Yeshua tells us he is NOT GOD when he says "Father into YOUR hands I commit MY spirit.

COUNTING THE 3 DAYS AND 3 NIGHTS CORRECTLY.

SUNRISE TO SUNRISE THE "NEXT" DAY IS 24 HOURS.
This is a very simple childish answer to a very simple childish question.
In each day there is a sunrise and sunset and these events divide the darkness form the light meaning day and night..
The book of Genesis tells us:
Gen 1:5 “And God called the light Day, and the darkness he called Night. And there was evening and there was morning, one day”.......

The word for "MORNING" according to "Strongs concordence is bôqer pronounced bo'-ker From H1239; properly dawn (as the break of day); generally morning: - (+) day, early, morning, morrow.
So the pagan SDA believes the day starts at "SUNSET" and not sunrise ??Saying that a day STARTS at "sunset" means the SDA have things backwards ! PLEASE PLEASE ask yourself these 2 very simple and logical questions

The jew rushed to bury Yeshua before the sunset on a Friday BECAUSE they needed to "PREPARE" for the sabbath and were rushing home to cook the food and get all work done BEFORE they went to bed AND SLEPT. The Jew wanted to be fully prepared before they woke up ON SATURDAY "SUNRISE" the Biblical start of a NEW DAY ! The catholics believe Yeshua was raised on Sunday morning and WOW WOW WOW there millions of blind followers believe it and never question or even count 1 2 3 days and nights!!

HOW THE CREATOR COUNTS THE 3 DAYS AND NIGHTS AND NOT THE 72 HOURS.

**Please remember we are NOT counting 72 HOURS**

Yeshua was raised DURING THE MINUTE BETWEEN 5.59 AM Sunday night AND 6.00 AM "SUNRISE" Monday morning.

I will leave you with what THE CREATOR says about a 24 hour period and let you work out who is wrong THE CREATOR or a man made anti christ trinity believing church "THE SDA" who are part of the Catholic church who simply cannot count.
Gen 1:5 “And God called the light Day, and the darkness he called Night. And there was evening and there was morning, one day”.......

A DAY STARTS AT "SUNRISE" AND NOT "SUNSET"as the SDA teach.
The FIRST day of creation DID NOT start with the sun "GOING DOWN"

A FULL DAY IS SUNRISE UNTIL SUNRISE THE "NEXT" DAY 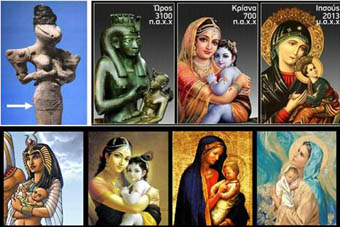 Everything in the demonic Roman Catholic Church is “encased” and surrounded by pagan and demonic teachings and “easter” is one of the most demonic doctrines of the demons of Rome.

Easter was originally the celebration of Ishtar, the Assyrian and Babylonian goddess of fertility and sex. ... After Constantine decided to Christianize the Empire, Easter was changed to represent Jesus. But at its roots, Easter (which is how you pronounce Ishtar) is all about celebrating fertility and sex.
The Cult of Isis, who worshiped “Ishtar”, was absorbed into the new Roman catholic demonic church by replacing “Ishtar” with Mary. MARY was then given the titles that were used for Ishtar, such as "Queen of Heaven," "Mother of God," and theotokos ("God-bearer") were given to Mary.... The "SUN" worshippers were included and became "SON" worshipers OF THE GOD MARY BORE!

“QUEEN OF HEAVEN – a fertility goddess to whom the Israelites, especially the women, offered sacrifice and worship in the days before the fall of the southern kingdom of Judah (Jer. 7:18; 44:17, 19, 25). In the time of Jeremiah, many people in Jerusalem and other cities of Judah worshiped the queen of heaven. When the Creator Yahweh found the pagan isrealites worshipping Ishtar HE DIVORCED THE JEWS who remain “cursed and divorced to this day”.
Jer 3:8  Judah also saw that I divorced Israel and sent her away because she had turned from me and had become a prostitute. But Judah, Israel's unfaithful sister, was not afraid. She too became a prostitute

The “queen of heaven" who was pagan and demonic is NOW the title given to Mary by the pagan Roman church.

Easter's name - The name Easter is never associated with the death and resurrection of Jesus Christ in the original Scriptures and is actually derived from the word "Ishtar” who was Queen Semiramis, the wife of Nimrod = the devil, (Genesis 10:6-8).

The title "queen of heaven" referred to Ishtar, an Assyrian and Babylonian goddess also called Ashtoreth (1 Kings 11:5) and Astarte by various other groups. She was ALSO known as the wife of the false god Baal, also known as Molech.

The modern pagan church and its 41000 denominations now worship the son of the goddess Mary as all denominations have replaced Ishatar "the queen of heaven" with Mary who gave birth to a god named Jesus who was originally called Zeus by the pagans .

EASTER ADDED TO THE BIBLE.  The catholic revised KJV ADDED the "PAGAN" festival to the goddess of fertility Ishtar which is "EASTER" in Acts 12:4 and removed "THE HOLY" festival "PASSOVER". The word is Acts 12:4 SHOULD NOT be THE PAGAN “Easter” it should be THE HOLY  “PASSOVER. The adding of pagan Easter was NOT a mistake it was intentional and today is a big festival with the pagan catholic roman church.

The word used in Acts 12:4 IS THE Greek word πάσχα PRONOUNCED pascha OR pas'-khah AND IS THE WORD PASSOVER (the meal, the day, the festival or the special sacrifices connected with it) AND NOT THE pagan Easter.