The Garden of Eden.

A short study of Genesis 2.

Adam and Eve were never in Heaven they were in "the garden" which was in paradise and paradise was in a part of THE EARTH Yahweh created.

The location of "the garden" is mentioned in Genesis chapter 2
The Lord God planted a garden eastward in Eden. . . . Now a river went out of Eden to water the garden, and from there it parted and became four riverheads.

Many believe the garden was located in the Middle East BUT using our modern maps we cannot prove it because there is NO PLACE in the Middle East were we find "FOUR RIVERS" coming out of "ONE MAIN RIVER".The Tigris and Euphrates Rivers are in the Middle East. The four rivers it seems are used as a "FENCE" and "BOUNDRY" to seperate the Garden from the rest of the world.

Many people who are manly naturalists and NOT Bible scholars say "EDEN" was in the African nation of Botswana, according to a major study of DNA. Scientists NOT BIBLE SCHOLARS believe our ancestral homeland is south of the Zambezi River in the country's north.

Many teach that the Pison and Gihon are the "Ganges and the Nile" BUT this has been debunked by their simple geographic position on earth and the fact that the Bible mentions “Tigris and Euphrates” Rivers as part of the 4 rivers.

WHY PEOPLE SEARCH FOR “EDEN”.

One of the main reasons people have searched for the position of Eden is found in the description in Genesis 2 were it mentions the first and second rivers.
Gen 2:11 The name of the first is Pison: that is it which compasseth the whole land of Havilah, WHERE THERE IS GOLD.
Gen 2:12 AND THE GOLD OF THAT LAND IS GOOD: there is bdellium and the onyx stone.

There are 2 types of GOLD considered to be mentioned in Genesis 2 the first is OIL and Yes there is allot of OIL in the middle east and the Oil is good and worth trillions. Oil is black when it comes out of the ground but once processed it becomes a yellowish gold and is so valuable that wars have been waged over it and who should have it and control it...
The second type of Gold in Genesis 2 is the literal Gold because in verse 12 we see that "bdellium and the onyx” STONE are mentioned.
Bdellium = a fragrant resin produced by a number of trees It is an adulterant of the more costly myrrh, used in perfumes..
Onyx = The black onyx is more valuable than the other colors of onyx available, Black onyx can vary in value from $1 to $500 per carat on its own. So onyx would have been very valuable in the day the Garden of Eden existed.

WHY WAS THE "GARDEN" PLACED "IN THE EAST"?

The pagan and demonic Jew killed babies they sacrificed to the devil (Baal) in the north at Mt. Hermon (Jeremiah 7:31-32)

The place the demonic Jews picked to murder children to Molac, Baal and many other false gods was "NORTH OF JERUSELAM" called The Valley of Hinnom also called Gehenna which Yeshua called "HELL" because of the Jewish babies burning day and night without end.
The demonic Jew also had street parties to false gods and got the whole family involved in there demonic worship (Jer chapter 7:18) of the queen of heaven "Ishtar" the pagan goddess.

The Hebrew word "tzaphon" means the direction "north" and a place that is "dark".

The devil throne is in Pergamum modern day Turkey and is north of Israel (Revelation 2:12-13)

The word "garden" has 2 meanings.

The word "GARDEN" in Genesis means different things
THE GARDEN OF GENESIS 2 WAS WERE ADAM AND EVE LIVED
Gen 2:8 And the LORD God planted a GARDEN in Eden and there He put the man and women He had formed.....

THE GARDEN IN GENESIS 3 IS THE REPRODUCTIVE ORGANS
Son 4:12 A GARDEN enclosed is my sister (barred from entering), my spouse; a spring shut up, a fountain sealed....
Son 5:1 I've come into (to enter sexually) my GARDEN, my sister, my bride.

Today men laugh and call a woman’s vagina "a lady garden" and the bible agrees.

PROOF YAHWEH FASIONED EVE FROM A RIB FROM ADAM.

The unbeliever in creation say “man has 12 pairs of ribs and so has women, so why does man not have one rib less than woman”!
THE TRUTH WILL NOW ASTONISH YOU !
Yahweh made the rib SPECIAL and UNIQUE, and like no other bone in the body. THE RIB IS THE ONLY BONE IN THE BODY THAT CAN REGENERATE ITSELF!!!
When a Thoracic (chest) surgeon remove ribs THEY GROW BACK IN 3 MONTHS!


A lot depends on the care with which the rib is removed; it needs to be ‘peeled’ out of its periosteum to leave this membrane as intact as possible, and I am quite sure The Creator God is able to remove a rib PERFECTLY ...
The periosteum the membrane that keep the rib in place contains cells that can manufacture new bone and the DNA in the marrow of the rib can be used to clone!
WOW ! WOW! So when Yahweh caused Adam to go into a DEEP (prolonged) sleep, Yahweh removed one of his ribs. Adam was then asleep for 3 months and when he woke his rib had regrown and he was fully healed..  Today plastic surgeons can reconstruct various parts of the body , particularly the bones of the face by using ribs taken out of the same scar on the rib cage many times..

In order to have power over the devil we must be wise to his ways of deceiving us..... We are warned that false teaches (demons) are dressed as SHEEP but are really “wolves” dressed up as Christians..
We are also warned that Satan WILL NEVER deceive you with something he tells us IS BAD FOR YOU.. Satan WILL ALWAYS deceive you with something he says IS GOOD FOR YOU and the truth will always be TWISTED.

The account of “the serpent” deceiving Eve in the King James Version of the Bible is DEADLY WRONG and underestimates the demonic brilliance of Yahwehs enemy and our adversary SATAN.The devil will never appear to you or entice you as a serpent he will be transformed into "an angel of light", the most beautiful and nice and kind (in the worse possible way) demonic force you will even meet and he will have "good news" for you it will be "full of pleasure" (2 Corin 11;14) .

Eve was tempted by THE SHINING ONE and not a serpent.  The devil uses the church to teach that the devil is grotesque and horrible. The Bible warns us that the devil is transformed into and angel of light and deceives the whole world.

LIES AND MYTHS Why do we believe in an Apple?

The old testament was written in Hebrew 1500-450 BC and in the 16th century, the word "MALUM" was misunderstood because it has two meanings in Latin and is first found in Genesis "the tree of knowledge of good and evil" MALUM = EVIL in Latin and because Adam "eat" from the fruit of the tree the early translators assumed the fruit was "MALUM" which also means "APPLE" in Latin...

Girls and boys start life with similarly size "breasts and thyroid cartilage (Adams apple)" and at puberty normally the breasts on a women developed and sadly unequally for some women who get very large breasts and some very small, the thyroid cartilage on most women does not developed but in some women the "Adams apple" develops just like a mans, and also some men develop breasts not as well defined as a women's but they are breasts.

WERE ADAM AND EVE MARRIED? 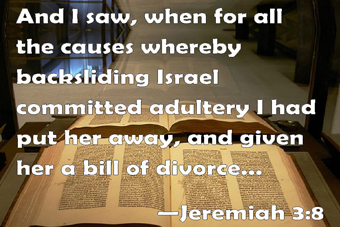 The marriage laws were not introduced until much later in the bible a long time after the death of Adam and Eve and one of the laws of marriage said that you could divorce if there was "adultery" and even Yahweh himself got divorced (Jer 3:8)

Adam and Eve were not only adulterers but they and their children were also incestuous in order to fill the earth with people SO THEY WERE NOT MARRIED as we are today for a good reason ...
There will be no marriage in Heaven for the FEW who are blessed to make it to Heaven BECAUSE they will be working and will not have any time or need to marry and make babies.

Does the Garden of Eden still exist ?

NO “The Garden” does not exist today because it was washed away and destroyed by “THE FLOOD” and Yahweh made sure of that. Can you just imagine if a Christian group found the original Garden of Eden IT WOULD BE A BILLION TIMES BIGGER THAN DISNEY AND “ALL ABOUT THE MONEY”?

Can you just imagine the unholy wars that would be raged over “who owns” the Garden of Eden IF IT WAS FOUND TODAY?

YES Yahweh fully destroyed the Garden and through His Word only gives us a glimpse into the stunning beauty and peace that was found there before sin entered man.  When man has fully destroyed this “paradise” we live on and has corrupted everything so that the air we breathe the food we eat and the water we drink starts to kill us THEN Yahweh will again look down on earth and see it is corrupted and again Yahweh will need to end the world before man kills himself in horrific ways.  Yahweh will end this world not because He can Yahweh will end the world because He must, to save man from himself AND WE ARE INDEED VERY CLOSE.